Official forum for the Sacramento Chapter of the Volvo Club of America (VCOA), aka SacVCOA / Sac Volvo Club.

The 2011 VCOA National Meet has been scheduled for June 17-19, 2011 in Lindsborg, Kansas, home of Little Sweden USA and the Midsommar Meet. 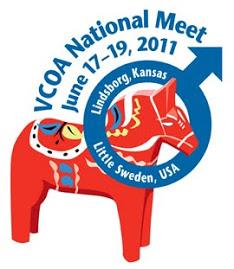 More information can be found on the blog here:
http://vcoa-midsommar.blogspot.com/

Lindsborg, Little Sweden USA, annually presents largest traditional Swedish Midsommar celebration in the USA that highlights authentic Swedish folk and cultural activities. In 2008, the HOA Chapter hosted a highly successful VCOA Regional Meet in Lindsborg. This year's event should offer an even more enjoyable weekend for Volvo enthusiasts from all across the country.

Lindsborg's central location offers VCOA members from all across the USA unique venue meet and share their passion for all things Volvo. Lindsborg's authentic Scandinavian atmosphere of Lindsborg is the best opportunity to enjoy your Volvo without having to cross an ocean.

The designation as National Meet hosts is a recognition of the quality and strength of Heart of America Chapter. Event planning continues and further details will be announced soon.

Come join us in the Land of Oz!* on June 17th, 18th and 19th in Lindsborg, Kansas at one of the most unique Volvo enthusiast gatherings ever!

*Disclaimer: The city of Liberal, Kansas - lying some 250 miles westward, claims that it is “The Emerald City”. But don’t worry; you can purchase Ruby Slippers in nearly every city in the State of Kansas!

Most probably associate Kansas with the term “Fly Over State”, but now you have the chance to see it up close and enjoy the geographic and historical significance of this wonderful place, “The Bread Basket” of the United States (20% of all wheat grown in the USA is harvested here). Kansas is both underappreciated and under advertised when it comes to Historical and Geographic significance. When you travel to the 2011 VCOA National Meet, you can fix that!

Just to the west of the city of Lindsborg lies Coronado Heights, recognized as the point being the farthest north that Spanish explorer Francisco Vásquez de Coronado made it on his quest to find “Quivira” one of the other fabled Seven Cities of Gold. There is a city named El Dorado, Kansas some 93 miles Southeast of Lindsborg, but, sadly it must be noted that its streets are not paved with gold and the average per-capital income is pretty much in line with the rest of the country.

165 miles East of Lindsborg is Baldwin City, Kansas – site of “The Battle of Black Jack”. This is claimed to be the first battle of the Civil War – preceding the attack on Fort Sumter by over four and ½ years. Kansas and its neighbor to the East, Missouri, were on opposite sides during the War Between the States.

Other notable landmarks associated with the westward expansion of our nation are the Santa Fe Trail, running some 17 miles to the south of Lindsborg, along with many Forts associated with the settlement of the western half of the United States. Some still in operation today, Fort Riley and Fort Leavenworth being the most famous.

So now that you have all the information you need to justify the travel to get there, you need to plan for attendance and participation at the Premier VCOA event of the year! This is about as close to getting to Sweden as you are going to get without scheduling Factory Pick up of a new Volvo! Registration can be accomplished on-line at http://midsommar.vcoa.org/ through May 31st.

Lindsborg, Kansas – also known as “Little Sweden – USA” is host to one of the largest “Midsommar” celebrations on this side of the Atlantic and draws many Swedes and ”Swede Wanna Be’s” from all over the country. With the Volvo Club of America in attendance they will have even more ambiance what with a substantial number of various models of the beloved Swedemobile to observe, reminisce about, and otherwise drool over – Classic or New.

We will not only enjoy the company of each other, but you can participate in the Friday evening tour of McPherson College’s special facilities, this college has a four year degree program in Automotive Restoration. Enjoy the town of Lindsborg’s “Midsommar Festival” Activities complete with a Swedish Smorgåsbord dinner Saturday evening, and, of course, the VCOA meeting and Car show complete with a special “50th Birthday” salute to the venerable “1800”. While you are at the meet, you can have the chance to meet Randy Pobst, of K-Pax Racing, the 2010 World Challenge GT Series Champion, (accomplished in a Volvo S60 of course!), and Dan Johnson, Manager of Corporate Communications for Volvo Cars of North America .

To wrap things up, on Sunday there will be an 80 mile ± Road Rally on paved roads in what can honestly be described as the “Prettiest Part” of the State of Kansas.